The release includes a major firmware update for ZED and ZED Mini, multi-camera support on Windows and Linux and plane detection for a simplified understanding of the environment.

Due to the amount of data sent by the ZED, some users could run into problems when trying to send more data than the USB host controller could handle. Our new firmware dramatically reduces dropped frames from low bandwidth, ensuring a robust connection in many circumstances.

We highly recommend upgrading your SDK and camera firmware. To do so, install the latest ZED SDK and run ZED Explorer. The tool will detect your firmware version and prompt you to upgrade. 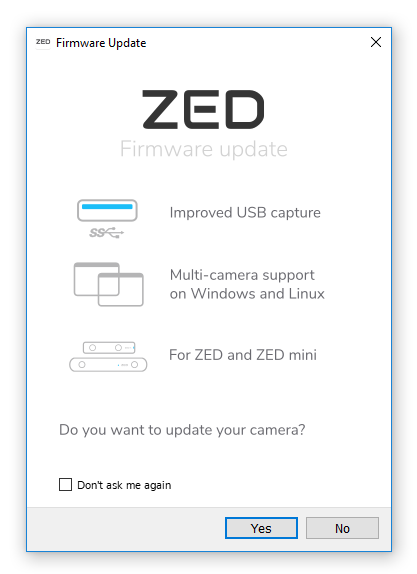 Note: Legacy versions of the SDK do not support the new firmware.

Along with the new firmware, we also updated the video capture pipeline on Windows. You will notice that it is now much faster to open a camera, select different resolutions and framerates, and that the USB connection is much more reliable. In 2.4.1, video capture latency on Linux has been reduced.

Starting with 2.4, you can now use multiple cameras with the ZED SDK on the same Windows PC. To get started, update the firmware of your devices using ZED Explorer and learn how to capture multiple streams using this sample code.

To help your application further understand the world around you, the ZED SDK now includes new functions for detecting flat horizontal and vertical surfaces in a scene. We call it Instant Plane Detection as it only needs a single frame to detect planes around you, so the feature can be used while exploring new, unknown environments. The sample below shows how it works.

The SDK returns planes as a new Plane structure, which includes useful information such as 3D position, normal, polygon boundaries and plane type.

Plane detection can be used in robotics to detect the ground floor and create a height map of your environment, or to set a world reference for positional tracking.

In AR, it becomes very easy to place virtual objects anywhere in the real-world, and have them collide accurately with your environment without using spatial mapping. It also allows to create new interactive experiences such as the AR “Splatoon”-like demo below built with Unity, where you cover with ink your surroundings to claim territory. The demo uses instant plane detection to detect a target area, create a plane mesh at the correct position and cover it with paint.

Positional tracking has also been made more resistant to moving objects in front of the camera. The ZED Mini now makes a better use of its integrated IMU to filter out moving objects, leading to a more consistent tracking behavior which is less subject to drift.

Recording uncompressed stereo video at up to 60FPS in 2560×720 resolution is a challenge for many platforms. To reduce the load on your hard drive, we provide two compression modes: Lossless and Lossy. These two modes now perform compression in parallel with I/O operations, improving throughput by 40-50%. 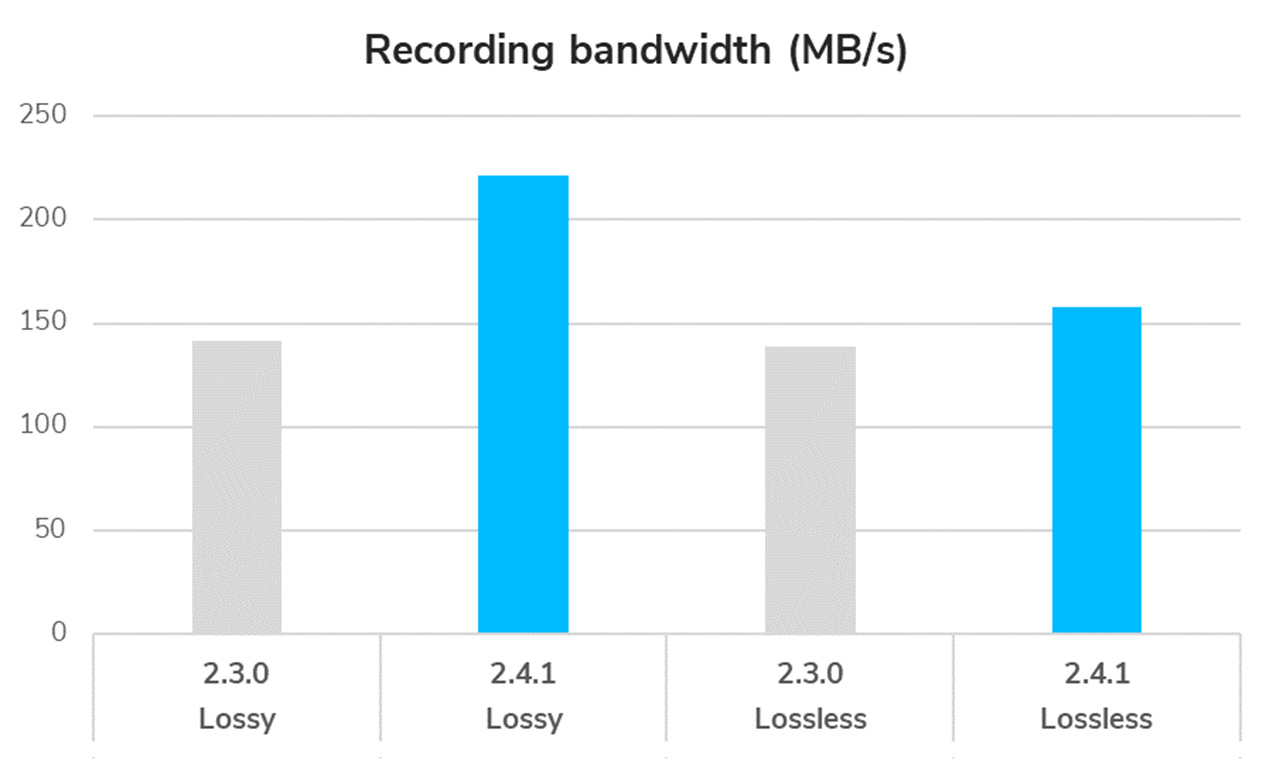 Nvidia Jetson TX2 board is one of the fastest and most power-efficient embedded computer with 6 CPU cores and a GPU. Its power consumption and performance can be adjusted using the NVPModel tool. Among the different modes available, the Max-N mode is a popular option that normally activates the 6 CPU cores and increases their clock frequency to the maximum. However, we found that this mode still allowed the CPU and GPU to downclock their cores on demand to reduce power consumption, costing precious time during heavy workloads. 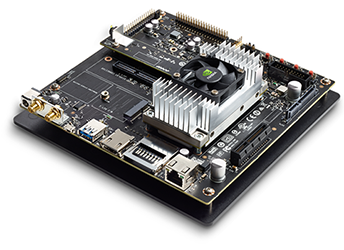 To maximize the performance of the Jetson TX2, we added in 2.4.1 an option during the SDK installation to register the `jetson_clocks` script provided by Nvidia as a service. The script enables all CPU cores and maximizes clock speeds on the CPUs and GPU. This improves by up to 2x the speed of depth and tracking on TX2 and reduces the CPU and GPU load below 25%. Stereo image rectification has also been accelerated. It is now 50% faster to retrieve rectified images with the ZED SDK on Tegra. 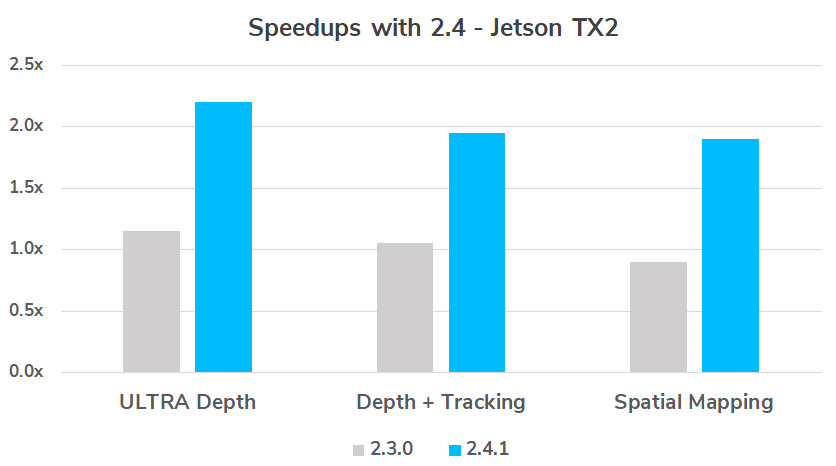 The SDK has been updated to support JetPack 3.2, and we’re happy to share with you Jetson Easy, a script from @rafaello86 that automatically sets up a Jetson with the latest versions of JetPack, ZED SDK and ROS.

Other New Features and Fixes

Download now the latest SDK . As always, we’re excited to share our latest update with you, and even more excited to see the amazing things the ZED community will do with it.

Much of the features and fixes are the direct result of feedback from developers like you. If you have any comments or desired features, we’d love to hear about it! Tweet us @Stereolabs3D or write to support@stereolabs.com.